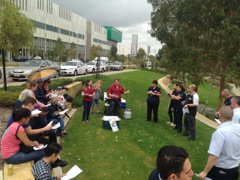 Back in April, more than 100 Serco support workers’ weren’t going to let a little rain get in the way of consultations on their Log of Claims for a new agreement at Fiona Stanley Hospital.

Workmates started their campaign in style and came together for a group barbeque, despite less than desirable weather conditions, to let their voices be heard loud and clear on employment conditions at FSH.

Since then, United Voice members have achieved:

The fight is not over though, members are still currently trying to resolve several matters for a new union agreement, including commitment to permanent employment, a solid consultation clause, safeguards around the introduction of a new PCA role and a commitment to offering extra shifts to those workers from the same department where the shift is available first.

Members at Serco are committed to winning the strongest agreement they can, and making sure that Serco offer quality permanent jobs.

If you want to join the Serco fight, join your union today.

UNITED WE STAND. UNITED WE WIN.